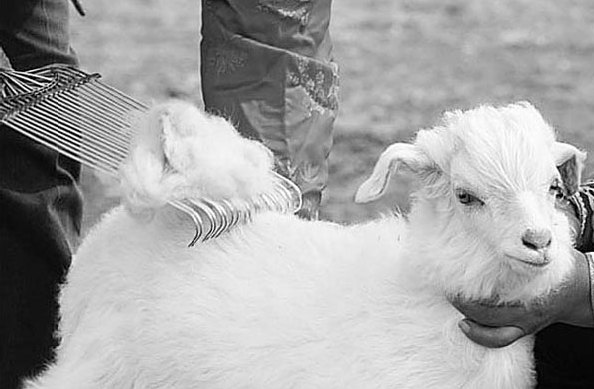 The Capra hircus, also known as the cashmere goat, produces some of the finest raw materials in the world, but there is a fibre even rarer, softer, and lighter: the fleece of its kid. The differences between adult cashmere and baby cashmere are quantity, fineness, and softness. Baby cashmere is available in extremely limited amounts since it can only be gathered once in a lifetime from each kid, around the time that they are 6 months old. During this time, a kid produces no more than 80 grams of remarkably soft, super fine down, compared to around 250 grams for adult goats. Once the coarser outer coat is removed, what remains is 30 grams of usable fibre, making baby cashmere one of the most exclusive materials in the world. Until the mid 2000s, goat herders used to merge the coats from adult and kid goats. It took from 1995 to 2005 to convince Chinese breeders to separate the two fibres, and set aside the exiguous amounts of the very finest fleece from their youngest animals – 10 years of a constant yet respectful presence in the area, with an unfaltering belief in the quality of a product that is rare by definition and hard to come by. The highly-prized, exquisitely light fibre that is baby cashmere exists today primarily due to the pioneering spirit and creative enterprise of, and its tireless quest for the best of what the world has to offer. All those years of patiently gathering minuscule amounts of the raw material were required to produce a truly unique and exclusive product. Ultimately, it is the fulfilment of a dream in establishing a new frontier of excellence.

Baby cashmere derives from the white Capra hircus, a goat breed that can only be found in the Alashan, a desert region of Inner Mongolia, located in Northern China. This area produces the very finest cashmere, which is why sources all its white cashmere and baby cashmere from here. The Alashan is characterised by extreme climates and temperature changes, and a scarcity of water and food. To survive these hostile conditions the Capra hircus has developed a soft and fine underfleece, cashmere, which stays in direct contact with their skin and provides warmth and protection. Herders harvest their goats between May and June, when the weather gets milder and the animals no longer need the extra protection from the elements. The fibre is obtained by gently combing the goats, helping them shed their fleece that they would have otherwise moulted naturally.