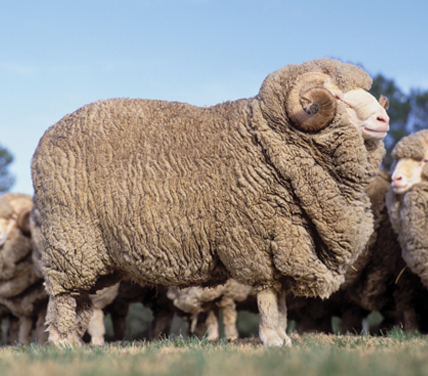 Its origin is uncertain. Known probably in the Middle East already in ancient times, it would have passed into the Iberian Peninsula through Morocco in the early Middle Ages, and the name Merinos could originate from the Merinid dynasty, which ruled over Morocco and invaded the Iberian Peninsula several times [1]. Of course, the modern merino comes from a breed raised in Spain in the twelfth century. The same Spain, by law, has maintained its exclusivity until the seventeenth century.
The first country to which Spain granted the merino sheep, at the beginning of the eighteenth century, was France, apparently following a donation between the respective sovereigns.
The industrial production of merino wool fabrics for dresses had a strong impulse after World War II. Among the main reasons, the need of the clergy, apparently, must wear certain clothes in all seasons, even in summer. In Australia, the Merino sheep was introduced at the beginning of the 19th century and found a particularly suitable environment thanks to the favorable climate and the availability of pastures.
In recent times, in Italy, the term "tasmania" has spread to indicate generically a light woolly combed fabric. This is due to a specific product, made with merino wool from an Italian factory, which has achieved considerable commercial success over the years. The name was chosen to highlight that this wool came from Tasmania farms.
The use of the term "tasmania" would therefore be improper. The correct term to indicate this type of wool, whatever its origin or brand, remains "merino".